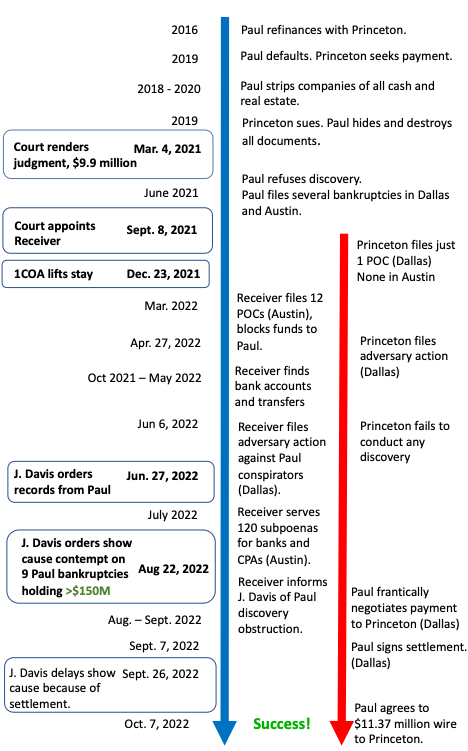 After being appointed, Mr. Kretzer filed a series of adversary suits and proofs-of claims-against debtor controlled entities in Bankruptcy Courts in Dallas and Austin. As a result, less than one year after being appointed (on September 2, 2022) the debtors agreed to pay $11,372,698.89. This cash has been transferred to Princeton, which declared in an SEC filing [known as an 8K] intent to pay a special dividend with this recovery of even more than the face value of the judgment.

In September 2021, the 165th Judicial District of Harris County, Texas appointed Mr. Kretzer to collect a $10 million plus judgment that had gone unpaid.  A copy of this turnover order is available here:

Here is the underlying judgment [issued March 4, 2021], which Princeton had obtained against the two judgment debtors:

After Princeton was paid in full, Mr. Kretzer filed his final report and accounting with the appointing state district judge on October 31, 2022:

Throughout the spring of 2022, judgment debtors challenged the turnover order in the Texas First Court of Appeals.  You can access Mr. Kretzer’s successful response in opposition brief here:

Brief of Reciever and Response to Appellants Rule 293 Motion

In addition, you can also read Princeton’s successful opposition brief filed in the Texas First Court of Appeals here:

In the Fall of 2021, the judgment debtors made unsuccessful attempts to avoid posting an appeals bond (known as a “supersedeas bond”).  You can read the initial order (entered November 18, 2021) of the Texas First Court of Appeals reinstating the receivership here:

The second order [entered December 23, 2021] by the Texas First Court of Appeals reinstating the receivership is available here:

BRIEF OF THE RECEIVER AND RESPONSE TO APPELLANTS’ RULE 29.3 MOTION