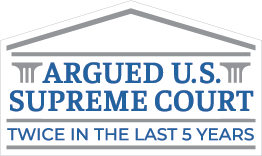 Attorney Seth Kretzer argued before the U.S. Supreme Court on November 9, 2021, in the case of Ramirez v. Collier. He convinced the court to halt Texas death row inmate John Henry Ramirez’s execution for a full briefing and oral argument, where the Supreme Court ultimately ruled 8 to 1 in his favor. 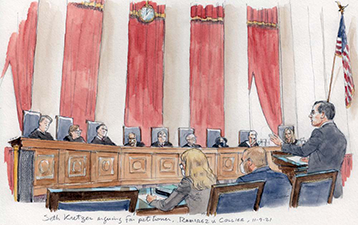 But an inmate on Texas’s death row named Erick Davila had the first-ever hearing on his federal writ in the Supreme Court.

By way of background, Erick Davila received the death penalty for the 2008 shooting deaths of a grandmother and her 5-year-old granddaughter. Davila, a gang member, drove to a house where he knew rival gang member Jerry Stevenson was and shot into the house and front porch. Instead of killing Stevenson, Davila killed Stevenson’s daughter and mother.

During his trial, defense attorneys said Davila didn’t intend to kill multiple people, only Jerry Stevenson, thus making the case ineligible for a capital murder conviction and the death penalty. To be convicted of capital murder in this case, Davila must have knowingly and intentionally killed multiple people.

In his brief to the high court, Texas Attorney General Ken Paxton said Davila did indeed intend to kill multiple people because of a statement made after his arrest. Davila stated that he wanted to shoot “the guys on the porch and … [was] trying to get the fat dude.”

The court sent legal definitions and included a charge that said Davila would be responsible for a crime if the only difference between what happened and what he wanted was that a different person was hurt. The defense objected, saying it was an improper jury instruction, but the court overruled the objection. Within an hour, the jury came back with a capital murder conviction, later sentencing Davila to death.

The crux of Davila’s current legal argument rests on this jury instruction and how his subsequent appellate lawyers dealt with it.

Davila’s direct appeal began after his sentence, but his appellate lawyer didn’t raise improper jury instruction as an issue. Furthermore, after his direct appeal, Davila’s state habeas appeal didn’t argue that his lawyer in the direct appeal was ineffective for not raising the jury issue. Seth Kretzer, Davila’s federal appellate attorney, called these mistakes “life-threatening.” 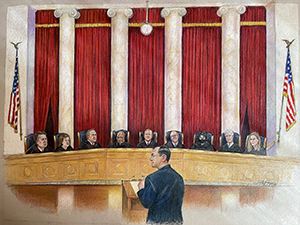 According to Mr. Kretzer: “The trial judge gave a bad instruction. The lawyer on direct appeal did not raise it. Had she attacked it and won, he might have gotten a new trial, not death-eligible.”

The state’s brief declared that Davila’s arguments are meritless, that a federal district court reviewed the jury instruction in question and found no fault against it.

Death row inmates can also appeal their cases in the federal courts system, but it is generally ruled that issues that could be raised at the state level — like the jury instruction — can’t be reviewed at the federal level until they have gone through the state courts. One exception to this rule is if the state habeas lawyers failed to raise the issue of ineffective trial counsel.

Kretzer argued that this exception should also apply to state habeas lawyers who fail to raise the issue of ineffective appellate counsel as well.

“The way the law works right now is if the trial counsel made a mistake, the federal court could save the inmate’s life, but if the appellate counsel made the mistake, they would have to go ahead and execute,” Kretzer said.

The Supreme Court agreed to review this case because different federal appeals courts have ruled differently on the distinction between ineffective trial counsel and appellate counsel. In previous rulings, the 9th Circuit Court of Appeals has said that there is no distinction between the two, but the 5th Circuit, which covers Texas, as well as the 6th, 7th, 8th and 10th circuit courts, have all ruled that the two shouldn’t be treated the same.

In short, the Supreme Court stepped in to straighten-out a national split so that a habeas petition does not face one set of rules on the West Coast but a different set of rules everywhere else.

Mr. Kretzer has argued dozens of criminal appeals in courts across the country; the honor of arguing Mr. Davila’s case is the highest, but only the most recent, point in this firm’s long tradition of providing skilled and aggressive legal advocacy to Texans facing life-endangering convictions and sentences, along with appellate and habeas attacks when such convictions and sentences contain legal error.

In July the case was “Affirmed”  with a 5-4 split.  The opinion was delivered by Thomas, J., in which Roberts, C. J., and Kennedy, Alito, and Gorsuch, JJ., joined. The judges who gave dissenting  opnions were Breyer, J., Ginsburg, Sotomayor, and Kagan, JJ.

The Houston Chronicle has written an article on Davila v. Davis. Click here to read the text.

The Fort Worth Star Telegram has written an article on Davila v. Davis. Click here to read the text.

The Texas Tribune wrote an article on Davila v. Davis days before the defendants appearance in court. Click here to read the text.

Click here to view the Petition for Writ of Certiorari for Davila v. Davis.

Click here to view the Brief in Opposition to the Petition for Writ of Certiorari for Davila v. Davis.

Click here to view a timeline of Davila v. Davis.

Seth Kretzer accomplished a rare feat when he convinced the Supreme Court of the United States to halt his client’s execution and grant full briefing and oral argument.

Texas death row inmate John Henry Ramirez was convicted in 2008 for the robbery and murder of a convenience store worker in Corpus Christi, Texas. He was convicted of repeatedly stabbing Pablo Castro 29 times in the 2004 crime, after which he robbed a second victim at knifepoint and fled to Mexico and evaded arrest for over three years. His guilt is not the question—Mr. Ramirez himself has acknowledged committing this “heinous murder.” Nevertheless, he was sentenced to death and eventually appealed his case to the U.S. Supreme Court—not in hopes of stopping his execution, but in preparation for it.

He requested that his Baptist pastor pray aloud and lay hands on him as he received lethal injection in the execution chamber. However, the state prison officials refused these last rites due to security concerns. Ramirez alleges that the Texas officials would be in violation of federal law and Christian traditions by refusing his last rites. This request has brought his case national notoriety over the months. In March 2022, the court ruled in Ramirez’s favor, allowing his execution to proceed as long as the state of Texas complied with his request.

Kretzer represented Ramirez and argued that Texas’ policy violates the inmate’s rights under the federal Religious Land Use and Institutionalized Persons Act of 2000. The Supreme Court ruled 8 to 1 in his favor, setting a precedent for similar requests in prisons across the nation. Chief Justice John G. Roberts Jr. stated for the majority that “while a state may limit the activities of spiritual advisers in the execution chamber, it ought not ban them.”

“The Supreme Court clarified that the rule of law is as ubiquitous as God. Both exist everywhere and always — high up in the hallowed halls of power and down low in the hell of the execution chamber,” stated Kretzer after the ruling. “Banning prayer by clergy members will not be permitted under the American legal system in even the most dejected square foot of this country. After an 8-1 Supreme Court loss, the time has come for the State of Texas to end its failed, taxpayer-funded battle against prayer.”

In an unexpected turn of events, Nueces County District Attorney Mark Gonzalez filed a motion withdrawing Ramirez’s death warrant altogether, stating that “the death penalty is unethical and should not be imposed on Mr. Ramirez or any other person.” Apparently, an employee in Mr. Gonzalez’s office had requested the execution date without consulting him. “My office is not going to seek the death penalty anymore,” said the district attorney. Mr. Gonzalez’s term ends in 2024, and whoever succeeds him in office will have the option to reinstate the death warrant.

Considering that Gonzalez’s office had previously issued three additional death warrants on Mr. Ramirez before the most recent, Kretzer was pleased and surprised to hear the news of Gonzalez’s decision. “This informs my belief that the litigation of Mr. Ramirez’s religious liberties case has touched some small part of America’s soul,” Kretzer said.

Kretzer has had considerable support in this case. He is thankful for the rapid assistance he received from the Supreme Court Clinic at the University of Texas at Austin School of Law. As a U.T. alum himself, Kretzer said there was no one else he wanted to partner with.

Attorney Seth Kretzer has argued countless criminal appeals in courts across the nation. This was his second Supreme Court outing, having previously argued another Texas capital case in 2017, Davila v. Davis. The state won the case with a 5-4 split in a procedural dispute over ineffective assistance of counsel.

The New York Times has written an article on Ramirez v. Collier. Click here to read the text.

Bloomberg Law has written an article on Ramirez v. Collier. Click here to read the text.

CNN has written an article on Ramirez v. Collier. Click here to read the text.

Click here to view the feature by Harvard Law Review